You are here: Home / Resources / Comparing Visio for the Web and Desktop

We are approximately half-way between last year’s Microsoft Ignite conference and this year’s one, so it is a good time to see what was announced on the in November 2019 for the Microsoft Visio roadmap during the conference ( see Visio roadmap: Now and beyond ). I have ringed the Visio for the web announcements, that have not yet been delivered, in the following slide from that session.

There is some confusion amongst users about the relative capabilities of Visio for the Web and Visio for the Desktop, so I would like to try to explain the differences as I see it.

I think that everyone is aware that Microsoft first made its money from its Windows operating system and its various Office products that ran on it. Microsoft Word, Excel and PowerPoint became the de-facto standard for businesses because it gave you great features and productivity benefits, and I can remember when WYSIWYG became the great new experience … we suddenly had an on-screen appearance that looked like the paper prints that we produced. You could enter formulas into cells in Excel worksheets to provide some automation, especially for financial calculations. Usage grew, and there was a demand for more automation, so Visual Basic for Applications (VBA) was added so macros could be written.

Some of the guys that had success with the Aldus PageMaker, the pioneering desktop publishing application, decide to write a smart diagramming application for Windows, and so Visio was born, independent of Microsoft until the acquisition in 2000. Like Excel, it has a built-in formula entry feature, modelled on an Excel worksheet, called the ShapeSheet. Every element in Visio has a ShapeSheet, whether it is a line, rectangle, circle, text, page or even document. Most users do not need to see it, or interact with it directly, but they benefit from the smartness that it adds to each part of a Visio document. It provides the ability to embed powerful behaviour, such as whether a shape acts as a connector between shapes that don’t, or whether it can contain other shapes or not, whether it contains rows of data, and what type each row is. The formulas in the ShapeSheet are entered by Microsoft or third-party developers, like myself, to encapsulate specific behaviours to satisfy particular tasks. Sometimes, the ShapeSheet is not enough, and then Visio can be automated using other programming languages. In fact, Visio was the first non-Microsoft application to be shipped with VBA built-in. All of these desktop applications provide great power, and originally were shipped on an increasing number of floppy disks, then CDs, then large downloads over the internet. As more power was added to entice users to buy the next version, inevitably some did, and some didn’t. Consequently, there were many users of the same application but on different versions, or even editions, and each with their own list of features and compatibilities. It was, and is, a confusing mess at times.

Fortunately, the internet has become increasingly reliable and fast, so most of the world has become more confident about having applications delivered by it, or even run across it. It has become difficult at times to recognise whether an app is actually installed locally on your device or is actually running somewhere in a datacentre across the web. The application can be continually maintained and updated by the supplier, who, in turn, charge a fee for the service. This levels the playing field for Microsoft, third-party developers, and the end-user.

So, what is the catch? Well, for legacy desktop applications, with millions of lines of code behind them, it can take awhile to provide the same functionality that users and developers have gotten used to over the years. Microsoft embarked upon this convergence of Windows desktop applications with their web-based siblings a few years ago, and for Outlook, Word, Excel, and PowerPoint, this migration is pretty advanced. Even VBA is disappearing in favour of a web-based scripting language, JavaScript. Visio is also on the same journey, but follows at a respectful distance behind it’s larger, more omnipresent, cousins. The reality is clear, Visio must make this journey quickly, otherwise it will lose its advantage over newer applications that were developed purely for the web from the start-off.

So, seeing how far Microsoft Visio for the Web has reached is important, and a recent review of Five recent collaboration and canvas improvements to the Visio web app shows that it is not only catching up on Visio for the Desktop, but is also adding collaboration capabilities that are much more difficult to implement with potentially disconnected desktop users

However, it is not yet at parity with Visio for the Desktop, but co-existence of the two applications within an organisation, is not only possible but desirable. Visio Plan 2 is the subscription for the more capable desktop application, which includes Visio Plan 1, the web edition. Although Microsoft provide an increasing number of templates for Visio Plan 1 users, there are still some templates and diagram types that are only available in Visio Plan 2, and this is likely to be the state for quite some time because some of these templates not only contain advanced ShapeSheet formulas that are just not available yet in the web app, but some also contain some automation code in the form of add-ons and add-ins.

Notice that there are a number of templates available in both editions, but the appearance is quite different. Also notice that the desktop app interface can include custom templates too … a feature that is not available currently in the web app. Some templates are very similar in both, but there are many more in the desktop app, and some of them require extra automation via add-ons that require the Microsoft Windows operating system.

You can review some of the templates that feature in both apps at Featured Visio templates and diagrams, and there are some at the bottom of this page that are not yet in Visio Plan 1. You can also Compare the Visio options, and get a trial, to boot!

The Visio web app user will get a list of their recent Visio documents, regardless of which Visio app was used to create or edit them. However, if the Visio web app user tries to edit a Visio file that has been edited with Visio desktop app, and added features that are not supported in the web app, then the following message is displayed…

However, it is possible to edit Visio diagrams in the desktop app, and keep them within the capabilities of the web app. This includes adding a lot of the smartness that is available in the ShapeSheet, and I have demonstrated some of the possibilities with a couple of blog articles recently, Using some Visio Shape Data in Visio for the Web and Using Emojis in Visio. The example Visio documents can be edited in either the desktop or web app, and can thus be collaborated with, or used as a template to create other Visio diagrams. The Microsoft file viewer for the web can open and display all types of Visio documents, so long as they are stored in OneDrive or SharePoint Online. The file viewer even displays hyperlinks and the data of each shape, but they are not editable. The Visio web app does not have an interface to edit shape data or hyperlinks, but it does not mean that they cannot be utilised. Similarly, the formulas in the ShapeSheet cannot be edited in the Visio web app, but a lot of them work just fine, so a user with the Visio desktop app can edit diagrams for specific business scenarios, and they can then be further edited with the Visio web app. Once a template is opened, both apps display a number of stencils on the left side, and a shape search box.

More stencils can be opened too, thus providing more shapes that can be added to each page.

The shape libraries are called Stencils in Visio, and the shapes on them are called Masters. When a Master shape is dragged and dropped on to the Visio page, it actually copies the Master into the normally hidden Document Stencil, then the actual Shapes on each page are instances of the Master.

Unfortunately, the Visio web app does not currently provide custom stencils or access to the Document Stencil, but Visio desktop app can be used to create custom Masters that can be available in the web app.

So, if we look at the upcoming roadmap items that I circled at the start, then you will see a couple of diagram types, and the shape enhancements will mainly be for them, no doubt:

Then you will see the Custom shapes milestone, where Microsoft will be releasing a way of providing customisations to your users. However, I will be writing a some more articles explaining how Visio desktop can be used to create smart custom Master shapes and templates that can be deployed to Visio web app users now. I will also provide a webcast to demonstrate the principles. So, please stay tuned….

Read about Customising Visio shapes for the web app … Microsoft recently announced the ability to access the shapes in the document stencil whilst using Visio for Web … if you have a Visio Plan 2 license. So, I thought I would make it clear what that means for custom shape developers. There are now three licenses that provide the ability to edit Visio diagrams…

Still in lockdown on holiday, so I thought I would create a version of backgammon that can be played with Visio for the web. This was inspired by my original Visio tutor, the late David Edson, who created a Visio backgammon document which included macros. Macros are not available in Visio for the web, so… 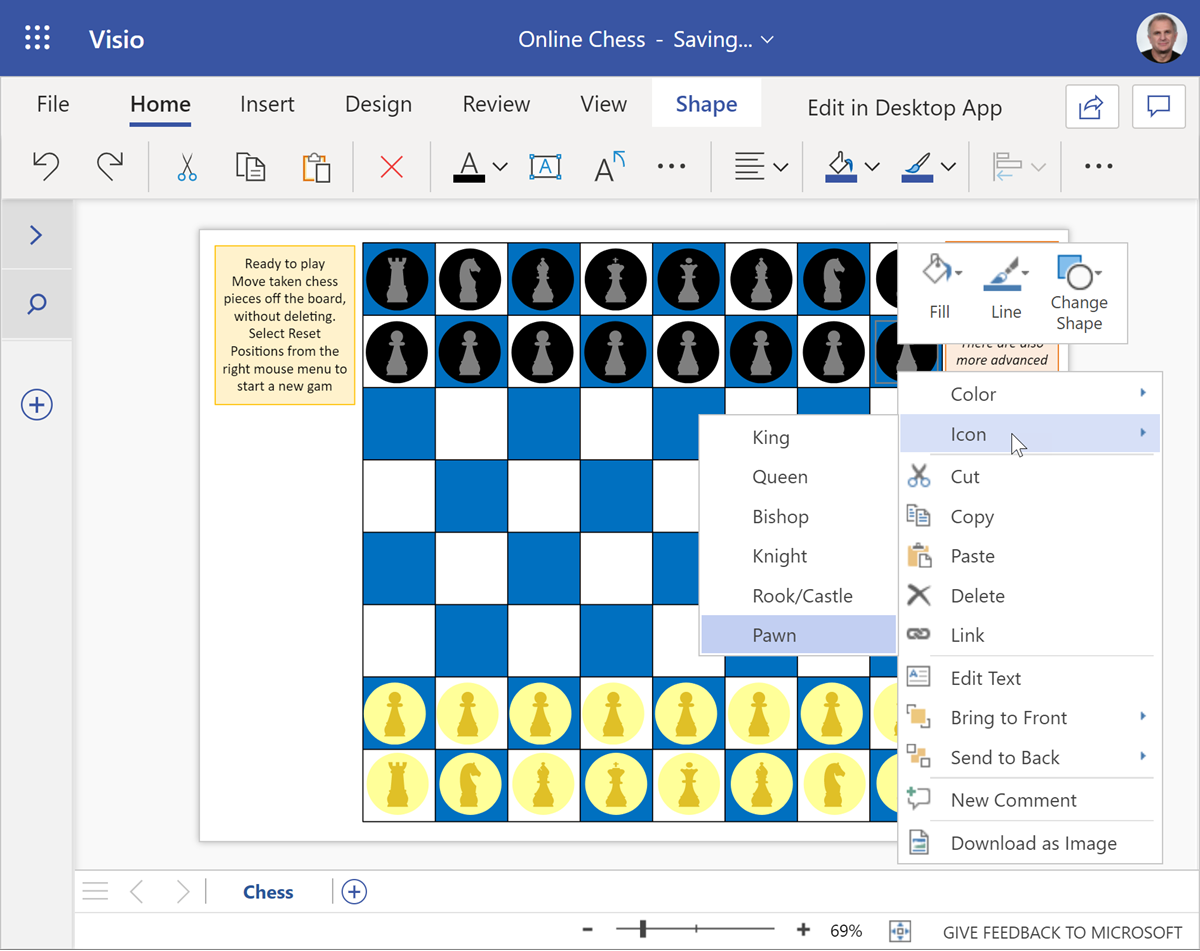 [Update : a new version of this file allows Visio for M365 users to edit/play with see Making Custom Shapes for Visio for M365] Following on from my last article about playing checkers with Visio in Teams, I decided that I should also revisit my earlier Visio chessboard to make it work in Visio online.…

[Update : a new version of this file allows Visio for M365 users to edit/play with see Making Custom Shapes for Visio for M365] We are all spending more time in Teams or SharePoint nowadays, but not everyone knows that Visio documents can now be shared and collaborated with, and even set as a Teams… I have presented at the last four Microsoft Ignite conferences and was part way through the world-wide tour when this pandemic began. I was looking forward to visiting New Orleans for this years shindig, but, alas, we are now in a new world where in-person events are a fond memory. Fortunately, Microsoft have the tools… I recently wrote a series of articles about some of the new capabilities of the Visio desktop and web app. Using the Visio Data Visualizer in Excel Using Visio in Teams Creating Visio Tabs and Apps for Teams with SharePoint Framework (SPFx) Designing Power Automate Flows with Microsoft Visio